Selecting an air-cooled heat exchanger involves many considerations, and the choices can be daunting for an engineer who is not familiar with this piece of equipment. The consequences of using the wrong heat exchanger can be serious. In the best-case scenario, the consequences are costly in terms of replacement of the failed heat exchanger, system downtime, and ruined product, while in the worst-case scenario, the ramifications can mean injury or death of personnel. There may be certain cases, like replacing a previous heat exchanger, where many of these decisions can be made by simply following the previous specification. However, industrial steam coils can last years or decades, during which time process conditions or performance requirements may have changed. By understanding the critical factors that determine proper coil selection, one can be confident that they have chosen a piece of equipment that will be both reliable and high-performing.

The factors that affect the coil design can be separated into two categories: primary factors which are essential to the operation of the coil, and secondary, nonessential factors which can be used to tune or optimize the performance or price of the coil. Here, we will explore both categories and give some examples of applications and coils that would be a good match.

What are the primary factors for designing steam coils?

The most important factors to consider when designing heat exchanger coils are those that determine the operation and durability of the coil:

Temperature of the Airstream

It is always important to consider the temperature extremes of both the entering airstream and the steam. When the entering air temperature is close to or below the freezing temperature of water, there is a risk that condensate will freeze inside the coil. Because water expands upon freezing, tubes that contain condensate can be forced to expand until they burst. Oftentimes this problem will only be caught once steam is observed to be leaking into the process air stream. To avoid in-service failure such as this, it is recommended to use a “steam distributing” coil.

A steam distributing coil uses a tube-within-a-tube design, where the steam is delivered through the interior tube and condenses on the inside of the exterior tube (see Figure 1). The interior tube acts a heat tracer which helps prevent condensate from freezing before it can be drained from the coil. Steam distributing coils are typically more expensive than standard steam coils, but they can be wise investments in situations that may see freezing air temperatures. 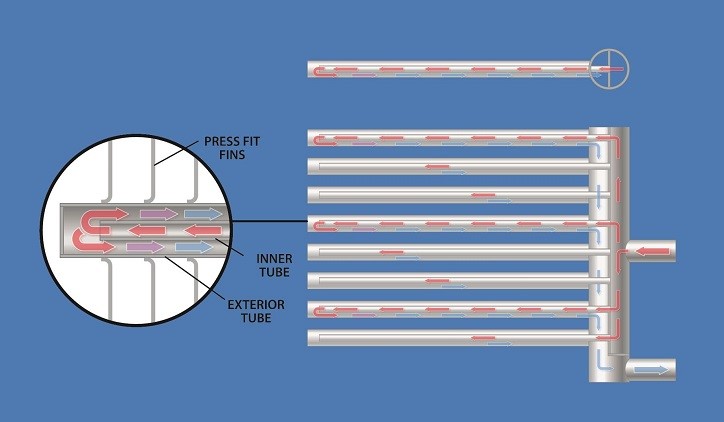 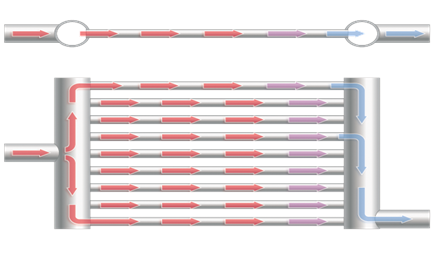 Another common cause of failure of steam coils is to have corrosives present in either the airstream or tube-side stream. Although corrosion can occur anywhere on the coil, it is typically in high-stress areas such as welds or in microscopic cracks that form in tubes that have been expanded. It is most important to be aware of potential corrosion of pressure parts such as tubes and headers, but corrosion of fins can also occur and result in the depleted performance of the coil.

Steel is well-known to rust in the presence of water, and this must be accounted for by using thick-walled materials which can be both expensive and costly in terms of heat transfer efficiency. If carbon dioxide is present in the steam system, it can dissolve in the condensate and form carbonic acid which may corrode carbon steels. The combination of corrosion-resistance and strength of stainless steel makes it a common choice for pressure parts in steam coils, but even stainless steel is susceptible to corrosion in certain environments.

Chlorides in either the airstream or tube-side stream can cause corrosion in stainless steels, which after a long enough time will consume enough metal to produce a leak. When the airstream possesses a high concentration of chlorides, it may be necessary to coat the exterior of the coil with a protective coating. The high salinity content of air on coasts near oceans can also be destructive to stainless steels, and this should be accounted for in the material selection.

Although different from corrosion, which is the chemical breakdown of metal material, erosion of the internal tube wall can also cause failure. Erosion is the physical degradation of the tube material from steam traveling through the tubes, and care should be taken to use reasonable steam velocities in order to mitigate the risk of damage from erosion.

The last of the primary considerations in coil design is the fin density. On one hand, the fin density (or fins per inch, FPI) is a parameter that can be tuned to allow a coil to meet a performance goal. As the FPI increases so does the heat transfer area. This results in an increase in coil capacity, but also an increase in air pressure drop across the coil. However, FPI should not be viewed as a parameter to be maximized if the coil stays under the maximum allowable air pressure drop. As the fins get closer together, they will have a greater tendency to catch debris on the face and inside of the bundle. When debris accumulates inside the fin bundle, it will contact tubes with surface temperatures in excess of 300-400oF. This can create a serious fire risk. When an airstream is unfiltered, it is good practice not to exceed 8 fins per inch; if there are a lot of particulates in the airstream then 5 fins per inch or less is a wiser maximum fin density.

There are applications where the heat transfer demands require as many as 14 fins per inch, but care should be taken to ensure that the airstream is well-filtered and the coils are regularly cleaned.

Chat With Our Experts →

What are the secondary factors for designing steam coils?

The secondary factors are those that are not critical to the safe operation of the heat exchanger, but can be tuned as a way of optimizing performance and/or cost of the unit:

The aspect ratio of the heat exchanger can be defined as the ratio of the finned length to the finned height. From the perspective of the coil manufacturer, large aspect ratios are the most cost effective. Longer finned length means that fewer tubes are required to reach the target finned area. This minimizes the number of joints that need to be welded, which is usually the largest driver of labor costs in heat exchanger manufacturing. However, it is best practice to keep aspect ratios under 2:1 as a means of maintaining even airflow inside the duct. Also, if the coil is meeting up to a preexisting duct, then it may be more cost effective to match the coil dimensions to those of the duct; although this may not minimize the cost of the coil, eliminating the need for transitions often will outweigh any marginal increase in coil fabrication cost. Thus, the cost of the coil-to-ductwork section should be considered when deciding on an optimal aspect ratio.

Like the coil aspect ratio, the orientation is also a parameter that may be tuned to suit the application best. If there is existing piping that the coil will meet up to, then the coil connection locations may need to match. Alternatively, if there is some flexibility regarding the piping, then either same-end or opposite-end connections may be employed, although this should be understood at the outset of the coil design process. The direction of airflow is not always a critical design parameter, but this is also best known at the start of coil design. Vertical airflow dictates that the heat exchanger tubes will be horizontal, but horizontal airstreams can be accommodated using either horizontal or vertical tubes. Like connection location, this choice should usually be made based on ease of meeting pipes to the supply and return lines of the heat exchanger.

The design of the coil casework is another decision that does not affect the performance, although details of the application may dictate one design or material over another. The least expensive option is to leave the headers exposed outside of the case, with the casework surrounding only the fin bundle (Figure 2).

Other types of cases are available allowing for options to meet a variety of cost and system requirements. Additionally, case material need not be identical to either the tube or fin materials. Since in most cases the case material does not contact the tube-side fluid stream, only potential corrosives in the ambient air and process air streams need to be considered when selecting a material. In some cases, there may be industry standards of cleanability or finish that must be met, and this should be understood by the end user or process engineer designing the unit. 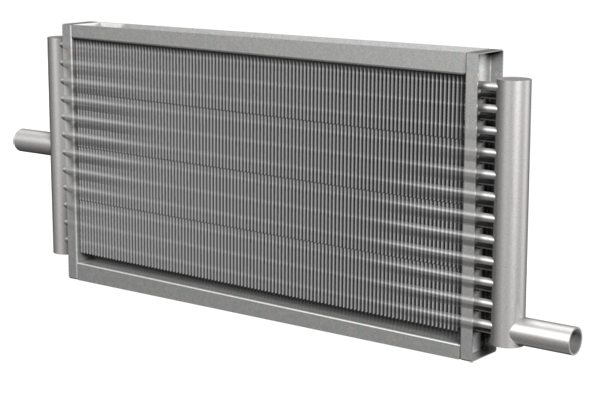 This article provided a brief overview of some of the design considerations when either designing or selecting a heat exchanger for an application. Some of the choices, such as method of steam delivery, materials of construction, or fin spacing can be critical to the safe operation of the heat exchanger. Other factors such as aspect ratio, orientation, or casework design can be tuned to optimize performance and/or cost of the equipment. Although no single article can exhaustively cover all the important factors in the proper selection of a heat exchanger, it is hoped that the reader now has a better understanding of the process and some of the questions that should be asked.